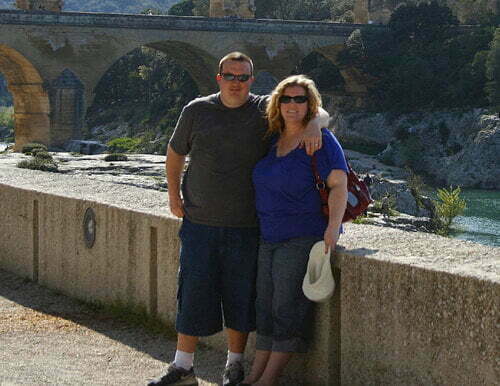 Per Gawker: The Arnolds are having a baby. Unless the public votes to have the child aborted. Meet the couple behind Birthornot.com, where “you can vote and choose whether we abort or keep our unborn child.”

Pete and Alisha Arnold, both 30, both tech professionals, live in the Minneapolis suburb of Apple Valley and have been married for 10 years. Since September, they’ve blogged about their expected child at birthornot.com, posting health updates about the mother and the fetus (which will be 17 weeks-old tomorrow), and ultrasound pictures and video. But at the top of the blog is a poll hosted by PollDaddy.com. The question: “Should We Give Birth or Have an Abortion?” “Give Birth” has 46 percent of the vote at the moment, with “Have an Abortion” at 54 percent. The poll closes on December 7th.

Pete told us over the phone that on that day he plans to check Polldaddy’s records to make sure there hasn’t been any double-voting or other evidence of fraud and then he and Alisha will use the results to decide whether to keep the baby. They’ll have two days to make a decision before the 20th week of Alisha’s pregnancy ends, and, with it, her last chance to get an abortion. The poll will influence their decision heavily, the couple said by phone this evening, but it won’t be binding. “It’s kind of like Congress. They might vote for something, but the president has the final veto. If it’s overwhelming one way or the other, that will carry a lot more weight.”

According to the couple, they’ve been unsure about whether they’re ready to be parents and have concluded that the best way to proceed is to ask random people on the Internet if they should have the child. (Tests have revealed that the fetus is a boy.) Alisha said that two pregnancies ended in two miscarriages in the past year and a half. During the second pregnancy, the couple bought the birthornot.com domain, and were in the process of deciding whether to put the birth up to a vote when they lost the baby. When Alisha got pregnant a third time a few months ago, they decided to launch birthornot.com.

Pete, who described himself as a Libertarian, framed the couple’s majority-rule abortion as kind of an extreme civics lesson that he hoped would bring the abortion debate home. “Voting is such an important part of who we are as a people,” Pete said. “Here’s a chance where people can be heard about whether they are pro-choice or whether they are pro-life, and it makes a difference in the real world.”

We pointed out an obvious flaw with his logic: The vast majority of people who are pro-choice aren’t pro-abortion, so it wouldn’t figure that they would automatically vote for the abortion option. The only people who would probably vote for the abortion are trolls who want to piss off pro-lifers. (In fact the anarchic message board 4chan has already hijacked the poll a couple times, tilting it to the “abortion” side.) Pete countered that during elections, “people do silly stuff all the time, and their votes get counted anyway.”

We’re not sure what to make of Pete and Alisha Arnold, to be honest. But here are three possibilities:

Regardless of your position on abortion, all of these possibilities suggest these people should never, ever raise a kid.

I am speechless. I … wow … no words. This has GOT to be staged!! There’s just no way! How could anyone actually turn to the INTERNET to determine something like this!!! I get the whole, controlTV.com – all in good fun type decisions …. but this is just … inhumane and deplorable beyond comprehension! My only question is, how long until Gloria Allred chimes in??? Anyone wanna take bets?? HAHA!! 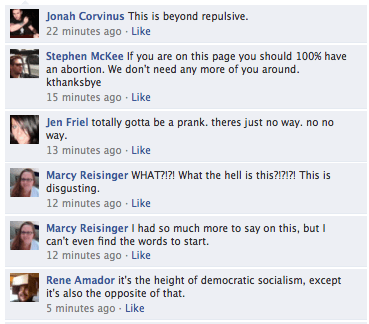 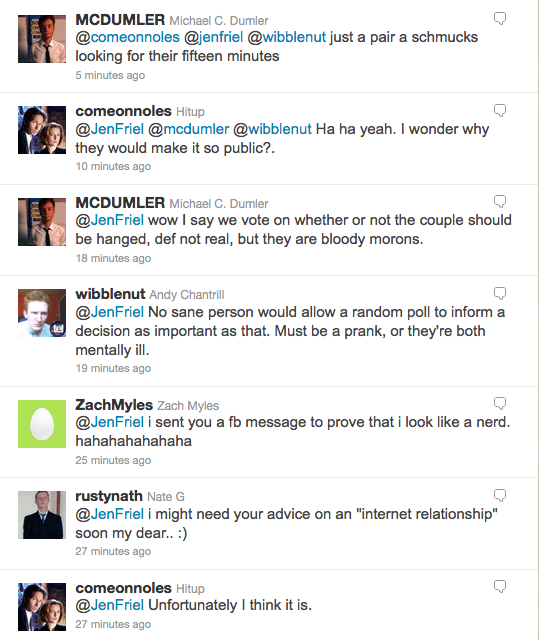 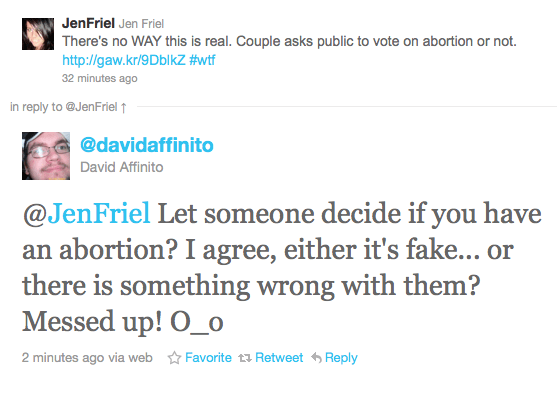 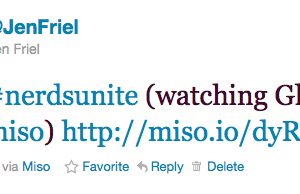