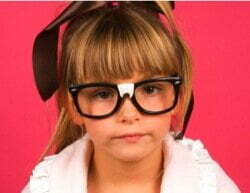 Wore Effing Gear’s “Burnout Hoodie” on the date. SOOO soofftttttttttttt!! Click the pic for more info!SOOOOOO!!! If you guys haven’t heard, I am conducting a new social experiment after my epic 103 dates by using OKC. I am still trying to find the organic root of attraction, but now taking the experiment offline while documenting it still online. You can read more about it here … and read the rules here.

Night one was an epic epic epic fail hahaha … but night two wasn’t so shabby!!! I actually met a boy!! Read how we were introduced here …

So, at 1:57 he texted me asking if we were still on for tonight. I was super super super elated as again, I very genuinely wanted to see this guy again, but you just never know at a bar when a guy says he is going to call you if he actually will. Totes one of those – I live life very much in the now not in the expected future. Was trying to stay grounded which is SUPPERRRR hard for a chickie that develops a crush on a boy. HAHAHA!!

I go to my event, and good lord, I was nice and toasty. I was at #droidchargederby for the entire afternoon, and it was sponsored by Grey Goose. When he texted me for my address I said you lucky lucky bastard – I’ve already been drinking all afternoon. HAHAHA!!! Fortunately though, two hours had passed in between the event and the time he was picking me up – so I sobered up. Goodness gracious, those drinks were DAANNNGGERRROOUUSS!!! (More on that event later btw)

He picks me up, and I finally ask where we are going (+1 brownie points btw for not having me plan the date. I don’t plan anything … ever. It’s not in my personality; my friends invite me places and I just go. I don’t care enough about whatever it is that I’m doing to actually be proactive and plan – dude, I have fun evverryywhheereeeeee)– he said, a sausage place and an arcade!!! I laughed, I said, you weren’t kidding? We’re really going to an arcade??? Do you understand right now you are climbing the charts of being one of my new favorite people???

He laughed saying he had never ever taken a chick to an arcade before. I was like ummmmm are you kidding? Shiny things, competition?? DONNNNEEEE!!!!! Yo ass is goin’ DOWNNNN!!!

He took me to this sausage place downtown – and not only had I never been there, BUT there were 9 people checked in on Foursquare upon arrival. NINE!?!?! +2 brownie points for finding a place that I’ve never heard of with so many nerdy people checking in. Totally hot.

We had to wait in line for a while (as it is cafeteria style where you order first then go and sit down. don’t let that fool you though, this place was AHHHH-MAAAZZIINNGGGG), but it didn’t really matter. He’s super easy to talk to. He’s so funny – he got so confused with my verbiage. I busted out some IRL-ness, totes, word to the bird jellyfish … haha, he goes, I’m going to need a translator to understand your nerd speak.

It was hot. He’s not really a nerd – a writer, (works in production as well) and deeply deeply sarcastic … but isn’t down with anything social media. For reals, Facebook yeah, twitter no, foursquare hell no. I tried explaining to him the benefits of using location based social media to tell stories etc, and it looked like his head was about to explode. It was pretty funny. Normally, that would have been a massive turn off, but on him it was endearing. He genuinely didn’t know, and didn’t ask me a ton of questions about it either (as it can be totally lame to have a guy that you want to bone consistently ask you about managing their personal brand, etc. If I’m trying to have sex with you, please don’t ask me for hashtag tips. Yes, it is my passion, but I don’t scream out oohhh babbyyy tweettttt meeeee as I’m having sex. I want to turn my brain OFF!)– it was more, hey little lady whatever knocks your socks off. To each their own. HOT! He gets it.

I ordered the Santa Fe jalapeno sausage, haha despite everyone SWEARING by the rattlesnake sausage – I just couldn’t do it. I loves me some spicy food anyway, so I was game.

We got to talking about high school, and it was funny – he was the captain of his basketball team. This dude is TALLLLL btw. Not like freaky levels of tallness, but good head to shoulder ratio if I am in heels (which btw, totally rocked my hooker boots. Yep, no vans either).

I told him we would never have been friends in high school – I was in and out and totally focused on my studies – not in any group. Literally, I wasn’t even in the nerd clique in my high school … I had no friggen clique. LAMMMMEEEEEEEE!!!!!!

It kinda got me thinking though about the archetypes we grew up with. Will the nerdy chick always be attracted to someone like the captain of the basketball team since it was something that was unattainable to us in our youth? Are we conditioned that way and then on a search for it as adults?? He had a presence about him that DEFINITELY suggested he was the captain of the basketball team without being douchey. He owns it without having to tell the world; he’s very unassuming but not a wallflower, that’s for sure!!!! I dunno, but that DEFINITELY rung a bell in my head when he said that. There’s gotta be something there …

We leave the sausage place two beers in our bellies and looking forward to some major arcadeness. Unfortunately however, the first arcade we went to closed like 5 minutes into us playing. Dude, Spring Arcade – they literally turned off ALL the electricity at 10pm. SUPPERRRR lammmeee!!! BUT, fortunately, I did get one game of Sega Rally in and I pwned his ass. WAAHOOOOOO!!!!!!!!! Totally beat his time. Like so much so, he should be ashamed of himself.

We got back in the car feeling a little bit disappointed that we couldn’t have more of an epic adventure in arcadeness- so we popped on our phones (he had the EVO 4G, to my now two Droid Charge, and motorola 1st generation Droid) to find another arcade open for us to play in.

ANNNNDDDDD we were in luck! Japan arcade not too far away – and open til 11pm. PERRFECCTTT!!!!

HAHAAH we get there, and omg – it’s totally in this super creepy looking mall. It would actually be an amazing place to shoot a zombie movie with a mall scene, because its that quintessential looking mall … but not a SINGLE chain store, and pretty much nothing I have ever heard of. Dude, the store names weren’t even in English!!!!

Whatevs, again, not mad at it – but just laughing my ass off. Where the hell is this dude taking me?!?!?! +2 points for epic adventures.

We get to the Japan arcade and ommmmgggggggg their games were hilarious. Dude, look – again NOOTHIINNNGGG in English!!! 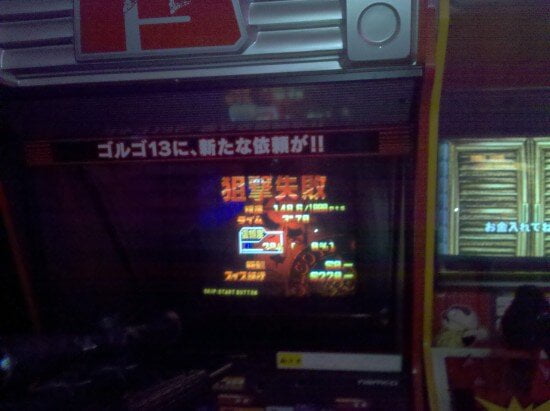 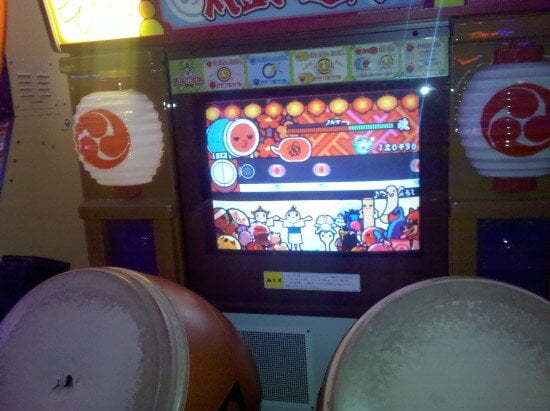 HAHAHAHA we kept trying to play two player games to go head to head, but we were like ummmm where’s the 2P option? OMG it was so funny – I had no idea what was going on (so what else is new …).

We then played some air hockey, and he schooled my butt – which was cool that he didn’t do the guy thing of letting the chick win; I don’t like that shit … I really really really enjoy a good challenge. 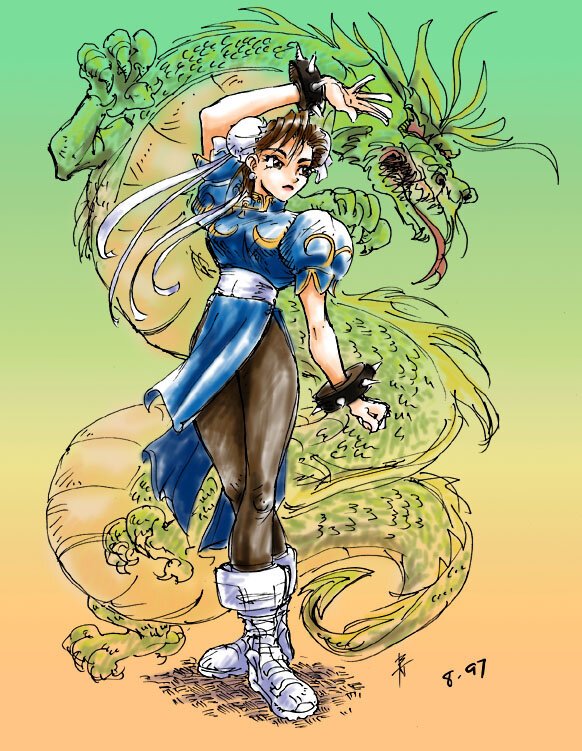 Anywho, then we played some Street Fighter II which YESSS was in English!!! HAHA!! 2P option as well. I was Chun-li, obvs, and kicked his butt in the first game and then got mine kicked in the second. I am totally one of those chicks that has NO game when it comes to arcade play. I literally just keep poking, pushing, and pulling until I figure something epic out. HAHAHA – so sad.

I literally cannot begin to tell you how hot all of that arcade playing made me. It was SERIOUS foreplay!!!!! I literally wanted to rip his clothes off right then and there and just go at it like there was no tomorrow. So fucking hot!!!!

We then left the arcade, and he took me back home.

I sat in his car and he didn’t even hesitate at going in for the kiss. OMMMGGGGGGGGGG I had chills. He has really soft lips … but not like girly soft … like the kinda soft that gives you butterflies and leaves you weak in the knees (+4) . Dude, I could make out with this boy for daayyyysssss.  I was so fucking turned on.

And there ya go! That was my epic epic epic date with a dude that I met at a bar of all places. We’ve been texting back and forth and I’m pretty sure I’ll see him again this week … but it’s kinda blowing my mind right now that this was only NIGHT TWO of my experiment and a guy is already getting a second date. I went out on 103 dates and only had 11 second dates with 4 that gave me the feeling of butterflies.

Maybe chemistry is way more important than even compatibility. I was at least 85% compatible with every. single. date. that I went on (as per the OKC algorithm) – but with this dude, without an algorithm – I had all that and much more. I don’t know how compatible we would have been if we had met on OKC … frankly, I don’t even know if I would have responded back to him. He’s super cute, but it’s his presence. It can’t be all based in pheromones – but I dunno, that’s the whole purpose of the experiment.

Again, I’m definitely hoping he invites me out again this week … but either way, I’m going to still continue the experiment as it really is a numbers game. I am curious, could I get butterflies like this with more dudes at a bar? Is he an anomaly? Or are a lot of my nights going to be like this?

HMMMMMMMMM!!!! Makes me scratch the noggin. So so sooooo looking forward to more of the findings.

Live in LA and wanna be part of the experiment??? As per the rules, I can’t tell you where I am going to be – but you can follow me on Twitter here, and check out my checkins on Foursquare here as I will be posting when I am actually there. Wahooooo!!!!

Special thanks to Effing Gear for their epic shirts that are acting as an ice breaker for the experiment. 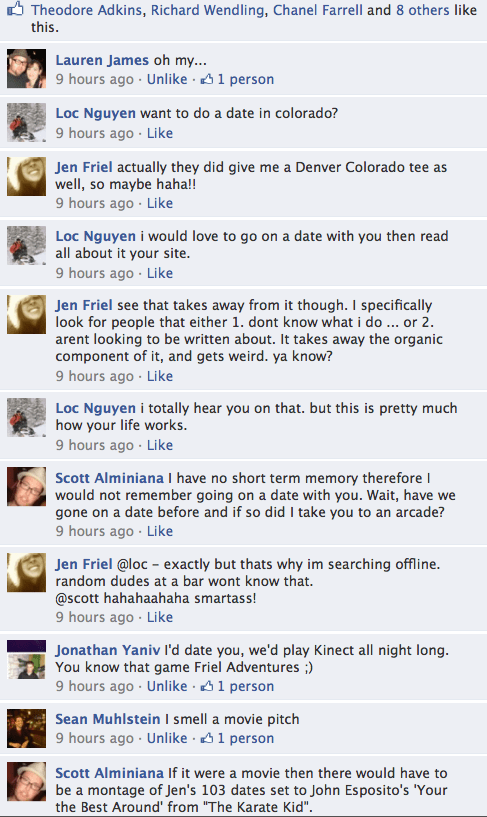 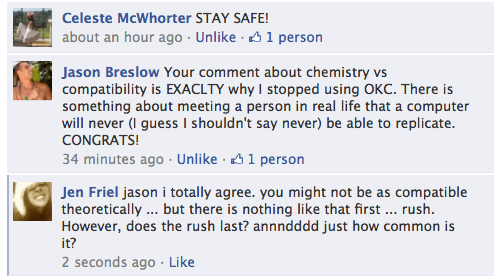 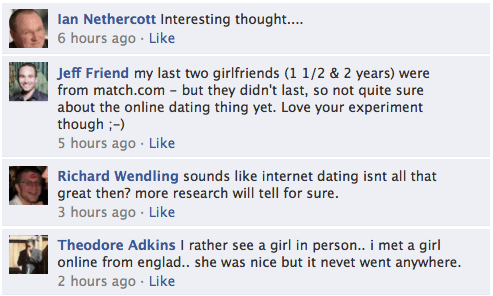 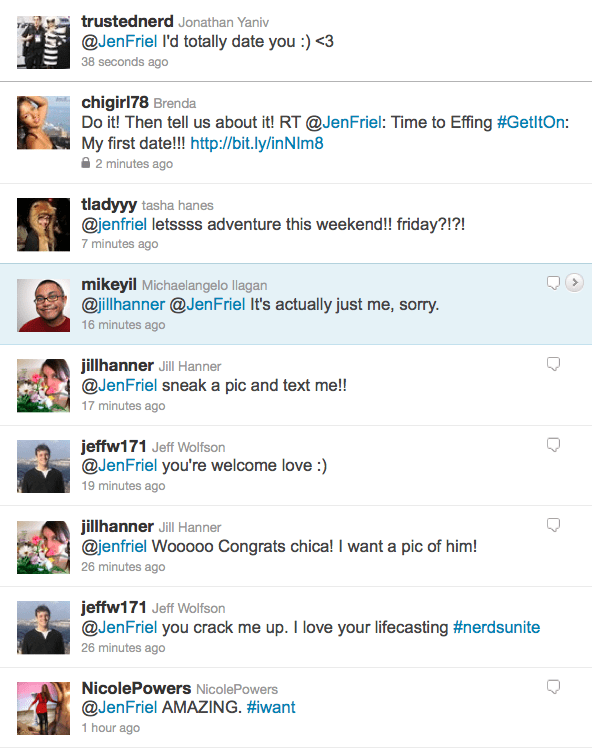 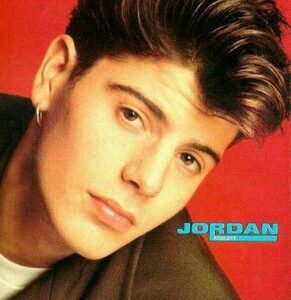 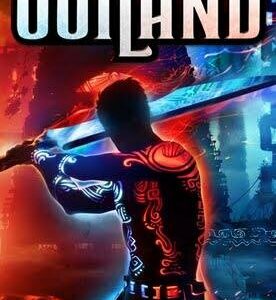 #RealDeal: Hitchhiking on a private jet is easy like Sunday morning (or your mom) 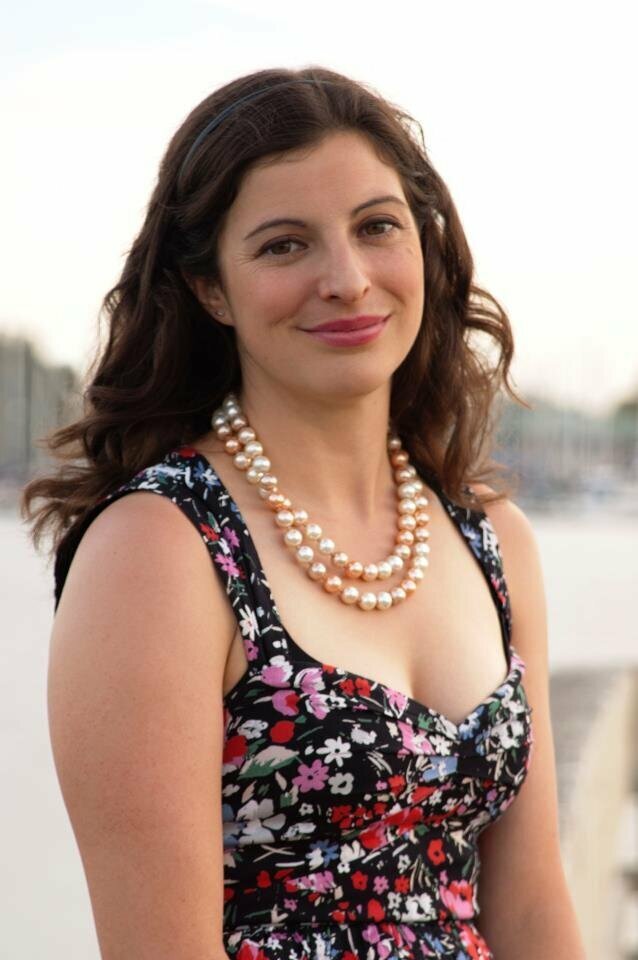 #NerdsUnite: My name is Alicia and I’m doing 50 dates in 50 states (Washington Date 1)