To go to this movie you have to put yourself into the same state of mind that one would put themselves in if they were going to see a musical.  Sure, there is no real good reason for everyone to get up and start singing and dancing and even more unbelievable that they all know all the words and moves, but you just go with it because it’s a musical.  Take that premise and apply it here.  There is no reason these people should have super powers or know how to fight but they do and ya just have to accept it. In this the first ever, “Fightical!” Instead of breaking into song and dance they break into fights and sometimes songs and dances. If you can accept that this is how this world works it’s not much of a stretch to accept a lot of the other crazy little things that happen in this movie. The floating words the icons that pop up and tell you what people are doing or how they are feeling.  Really this is the best comic to movie 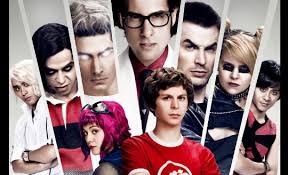 movie since Sin City as far as keeping true to the content.  Yes… yes… I know they still left out a lot of stuff from the comic.  The hard core fans will always have that little something to complain about. So maybe I’m not a super hard core fan. This movie has to be the best movie I have seen this summer and that includes Toy Story 3 and Inception. (Those movies are a must see btw.) This movie is just unbelievable fun.  I really wasn’t ever bored, even in the slow parts the dialog is just wonderfully witty.  The Gay roommate especially is by far one of the coolest characters in cinema. His high school GF plays her part perfectly and the two leads played perfectly. This coming from a guy who really dislikes Michael Cera. Seriously, i just don’t think he has ever really played a character where he had to act.  Here it’s a lot the same but his acting himself very well.  The real props come when you get to see all the evil ex-boyfriends. Considering that Scott beats up both Captain America and Superman in one movie. Just mind blowing really.  This coming from a person who was able to direct a movie with 7 bad guys.  7!!!!!!!!!! Most directors cripple themselves with 2. Sure the story seems a little rushed at times to fit them all in, but fit them in well he does. So from this Saint I would recommend this be the movie that if you don’t watch any other movies this summer… GO AND WATCH THIS ONE!

So on the saint meter

Just another no spoiler review from this saint

#WTF: And he’s out … the man who hit me in the head with the brick has been released

Inside the #Nerdy Noggin: Understanding the Spank Bank