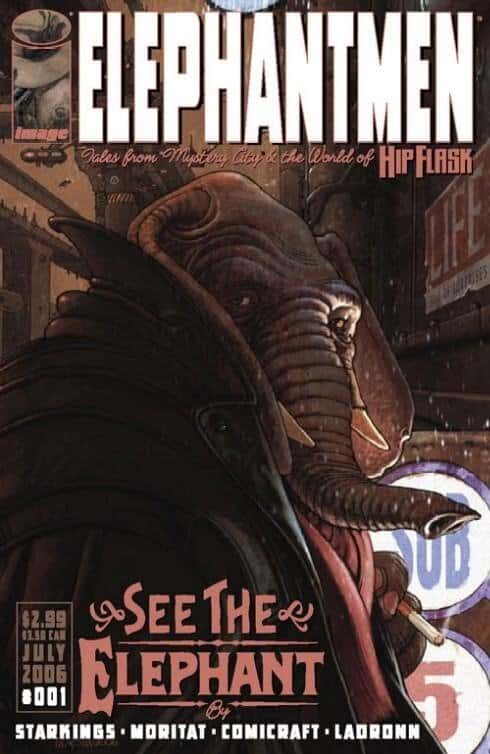 Talk about a beautiful, thought-provoking comic! Elephantmen, written by Richard Starkings and illustrated by Moritat, is definitely a comic worth your time. The comic opens with Ebony, half man and half Elephant, standing outside of an adult club. Savannah, a little girl wandering the streets, walking up. She begins by asking him if he can pick his nose. He replies that he doesn’t have to because he can put his nose in his mouth. The two walk along, Savannah asking question after question, as kids do. She asks him about his origins, bathing habits, and anatomy. Throughout the comic, certain questions trigger flashbacks in the elephantman’s mind. Through these flashbacks, we learn that Ebony was created in a laboratory through a woman that was used as a “vessel” for Ebony’s early development. Other questions, such as “Have you ever killed anyone?” trigger memories of himself as a war machine toting heavy artillery and killing everything in sight. The end of the comic is the completely beautiful thing. Savannah’s mom sees her talking to Ebony and rushes over. She threatens him, saying that if she ever sees him around Savannah again, she’ll “report” him. Savannah barely has time to hand Ebony a drawing that she’d been working on before her mother yanks her away. At the end, Ebony opens the drawing. It’s a heart with Ebony inside it with a note that says “Don’t forget to wash behind your ears”. Isn’t the fact that a child sees through innocent eyes beautiful? Isn’t the unjudging kindness of a child overwhelming? Even though Ebony was a murderer and a genetic freak, Savannah loved him upon  meeting him. I think this comic is meant to be a lesson to us all…or maybe I’m wrong and Ebony will murder a thousand people in the next issue. We’ll see!

On to the ratings!

Creativity of Story: 5/5 This is absolutely beautiful! The contrast of the flashbacks and current time works great. The way that the author gives us information about Ebony’s past is very creative. I’m really excited to see what comes of Ebony and Savannah. Although it’s simply a prequel, I feel like I’ve read a complete comic and that I’ve gotten a lot out of it.

Creativity of Art: 3/5 I feel like the details in the human faces were a bit lacking. The lack of detail gave it a smooth, plastic feel. Ebony, however, looked fantastic. The bold lines make the foreground stand out from the background and the backgrounds aren’t distracting.

Overall Casual Read: 4/5 Have the next in the series with you if you decide to begin it.  I would be disappointed if I only had this one, simply because I want to know what happens next! I think it’s going to be a unique reading experience and I highly recommend it!

For more kick ass comic reviews, head over to www.kryptodies.com ! Find me on Twitter: @kryptodies and @ashleighmayes 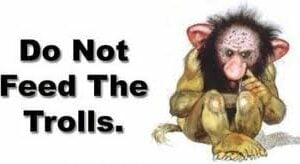