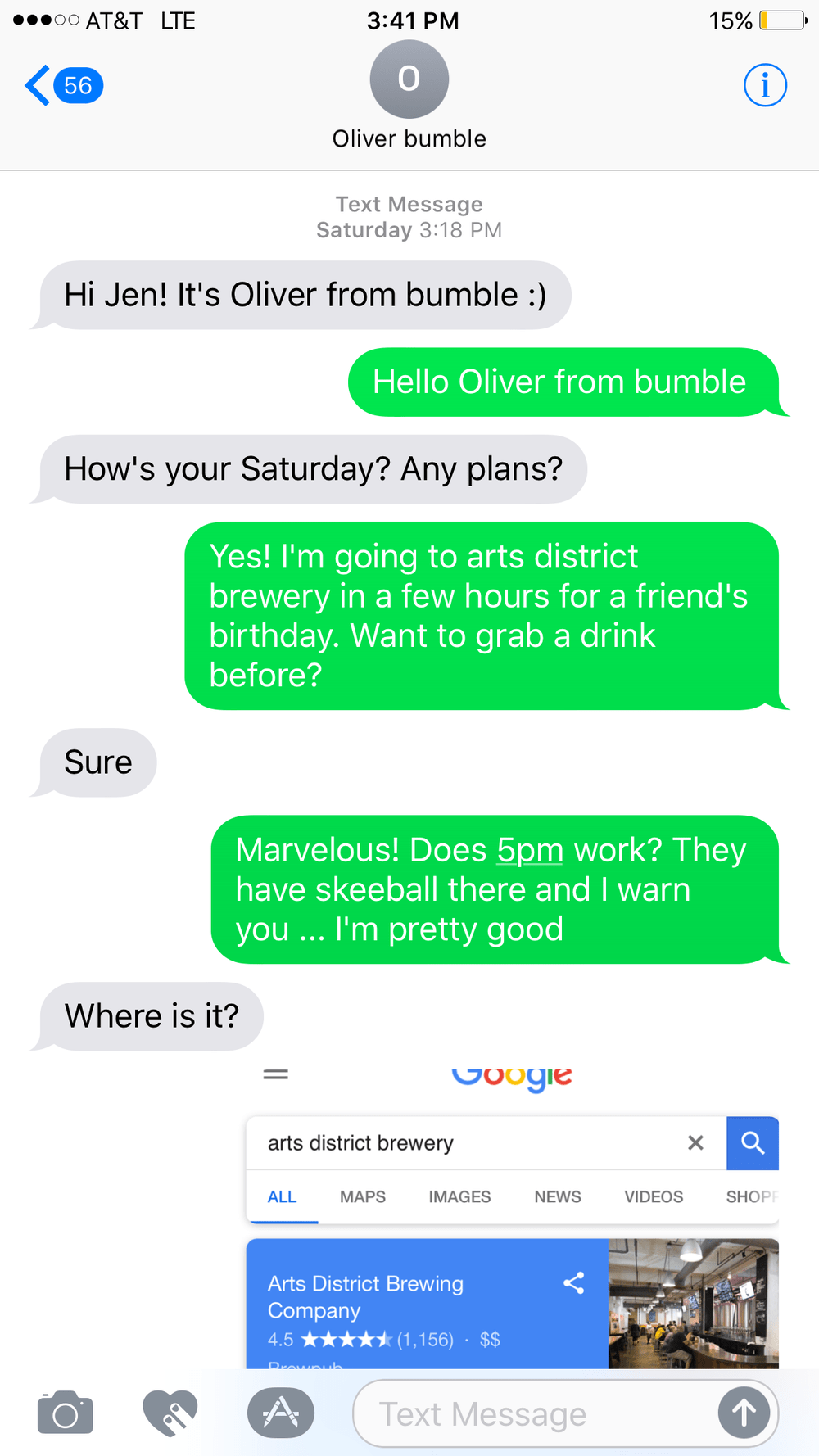 #RealDeal: What’s your fantasy (that time I catfished a celebrity only to be catfished myself the next day)?

From the Talk Nerdy To Me Archives …

I’ve decided to go to Burning Man this year. I don’t want to talk about it until I experience it, but one of the things my friends keep telling me is that once you are called and you answer (I know I know stay with me here), “things will start to fall into place and come together effortlessly and naturally.” I can’t see the full picture of what that means yet, but what I can see is that my actions have an almost IMMEDIATE reaction. This story is the proof in the pudding …

On Saturday, I received this text from a guy on Bumble  …

I wrote “friend” and not “girlfriend,” and by singular girlfriend I meant plural … and by plural I mean 10 or so deep.

Either way, he accepted the spontaneous plans, and after an hour delay on my part, we met up at the Brewery (still a half hour before my friends arrived).

I found him as soon as I walked in.

Much like my NC dating master guru predicted, he was even more attractive in person than in his photos.

<tangent> See, I’ve enlisted the help a non-certified Guru that happens to be my bestie born in the body of a very attractive gay male. He’s the reason why I changed my dating profile, and has helped identify which of the matches are actually worth my time in meeting. I’m looking to get married and have babies, which means I am pulling out all of the stops to make sure I am not only meeting the “right” kind of guy but that I myself am making the “right” choices. </tangent>

From my perspective, his photos were great … I mean come on …

… but I just didn’t have enough of that pizzazz of back and forth witty banter that eventually woos me enough to want to meet with someone.

We then sat down grabbing a round, and started the ever so painful “getting to know someone process.” By the end of the first drink we had covered current location (including every place we have ever lived), work, family, growing up, and a slight understanding of where our individual futures were heading.

Wanting to shake things up a bit, I asked if he was any good at skeeball.

“I don’t know how to play,” he admitted.

Six games, a 100 point rim shot, and 380 score later, the student had become the master.

Well done, I said with a high five beginning to now respect him.

He mentioned during our “getting to know each other process” that he was a rocket scientist (my words not his, his words were “astrophysicist,” which is close enough). Wondering if life was pulling my leg (because NO ONE that attractive could ACTUALLY be smart), I pried more into what he did exactly work wise and immediately found it fascinating.

I had no idea that if you work for NASA or any sort of funded space program, as the scientist you are also responsible for fundraising your own research. Obviously that’s spoken very simply and there’s also a political element to it, but I had no idea that EVEN AT THAT LEVEL they had to hustle and work hard not only on their craft, but on their marketing, pitch, and sales skills; that takes an OFF THE CHART level of IQ and EQ that I found very attractive.

By the second glass my girlfriends arrived, but not before taking this SUPER CREEPY video of our rendezvous.

Jen Friel, he is really hot. (My name is one word in that group, and throughout most of my life.)

I know, I said laughing, and HE’S ACTUALLY SMART  …

I then properly greeted the birthday girl, as she asked where I had found this guy.

“Bumble,” I admitted. “Totally new perspective on men, and I feel like my life is coming together in a full circle. I’m in the process of completely leveling up.”

My date was four friends into surface conversation, before I checked his pulse.

“You have really great friends,” he said smiling.

“Oh they are a handful,” I said, but I respect and appreciate you were willing to meet me and them so spontaneously.

I then asked if he wanted another drink, and he said he couldn’t because he drove.

I totally respect that, I said. Let me walk you out.

I dared to
ot turn around as I walked him out wondering what hilariously obnoxious motions my girlfriends were NO DOUBT demonstrating.

I stopped on the sidewalk as we approached the parking lot.

“It was really nice to meet you,” I said with a smile and a pause.

See, normally if I’m not into a guy I’ll go in for what I call the “confident hug.” It’s warm, and inviting but also leaves ZERO chance for any sort of awkward unwanted kiss.

Standing there for a moment meant that I was interested.

He then went in for the hug, and it kinda seemed like he was wondering if I was going to kiss him …

I walked back over to the group and was immediately asked about the kiss.

Didn’t happen, I admitted, but it was a really great date!

Still confused at how such an attractive and smart creature could be single, they asked again how we met.

“Bumble,” I said again. “I’ve had an entirely new perspective on online dating thank to the NC Guru. Look at my profile. It reveals everything and nothing!”

My phone was then passed around the table as one of the girls clicked on my messages and saw that only one name was familiar.

“Who ARE ALL these men,” she asked?

“There are plenty of great guys out there!! It’s just ALL about how you market yourself!!! I’ve known this for a while, but never executed from the male perspective.”

Phones were then passed around as I changed two of the girls’ profiles passing on the guidance shared.

“You took away all of the things I like,” she said.

Done, we all agreed, as I popped on over to the other side of the table.

As I sat down, I noticed two of the girls laughing and admitting that they were catfishing someone.

Knowing how attractive my friends are, I was a bit confused. “Why would either of you be catfishing someone?”

“Yes,” I said, knowing that everyone knows Puddin’ Tane.

<tangent> See, Puddin’ Tane (name changed to protect the guilty) is a not only a very well known actor, but to the women of Los Angeles? He’s known as ONE HELL of a creep in online dating. I don’t know if this has been publicly revealed, and quite frankly even if it has been, it’s not my place to call them out. Either way, because we had/have no plans on fucking him, we immediately decided to fuck with him … </tangent>

“THIS IS GENIUS,” I said super excited. “I can help you confirm your identity. I HAVE HIS NUMBER TOO!”

We moved our drinks to the side as my own spy mode was officially activated.

First things first, I said, let’s confirm if he uses multiple numbers and or has a burner of some kind.

We both pulled up the info on the text message and confirmed that indeed it was the same number.

That technically doesn’t confirm that he doesn’t have multiple lines but as two “perfect strangers” that met him, we at least had the same digits.

Second, you send him a photo from your phone, and I’ll send that SAME photo immediately after.

She did, and once complete, I sent this …

Immediately I got a response …

“What’s your name and how did you guys meet?” I asked for the first time.

I BURST OUT LAUGHING as I text her answer …

See, our girlfriend really did meet PT in Cabo and got his number. It wasn’t until she came back telling my OTHER girlfriend about it and it was the other girlfriend who admitted to liking him. Thus the catfishing began!

Stepping right into our trap, he asked for what we both knew he would ask for …

See that? It visually reads “insert your penis here.”

Catfish confirmation mission complete, we then level upped our own game and decided to Facetime PT …

… and like a smart man he knew not to answer.

Moving onto something else that was shiny, we quickly got bored and shortly after I grabbed a LYFT home.

The next morning, (I was shockingly perky as a peach) I got a text from a guy I was scheduled to have a date with …

I then suggested a restaurant that 1) I knew had bottomless mimosas, and 2) was a place where I knew the bartenders. If the date sucked I could at least make the most of it by hanging with my friends and potentially meet another guy.

His answer surprised me … 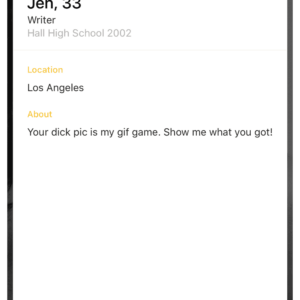 #NerdsUnite: That time I got stiffed (instead of getting something stiff)

#BurningMan: That time being called a Virgin Burner was a “good thing” (kinda NSFW)

#BurningMan: That time being called a Virgin Burner was a “good thing” (kinda NSFW)

#NerdsUnite: That time I got stiffed (instead of getting something stiff)

#RealDeal: Taking a Break in a Relationship (The Ultimate Guide)

#TruthBomb: 5 Clear Signs of Separation Anxiety in a Relationship

#Question: What Does It Mean When Someone Copies Your Body Language?