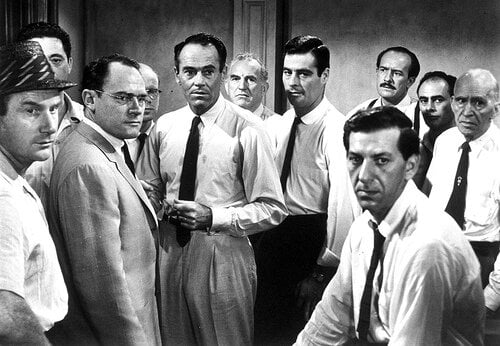 Okey dokey, so I read on AdAge that AOL is seeking a new agency to help them revamp and rebrand to encourage users to “care about AOL again.”

Here are my two cents … and no, you can’t ask for change.

I was up for a gig to be the right hand of AOL’s CEO Tim Armstrong a few summers back. It was rad I made this little video with the little flipcam they sent me …

I then skyped with their NY offices, and one of the questions they asked me was how I could help change things at AOL.

I said, first off, I’d admit that you guys are irrelevant and own the nostalgia factor.

All three people on the call stared at me with BLANK faces.

Did she REALLY just say that??

They obviously weren’t pleased with my answer, and I wound up actually not getting the gig – but I STILL tell people about that interview because I STILL do believe in it.

I grew up online. I was on prodigy before I hit double digits, was the original cyber-babe on Yahoo circa 1997, and CRRIIIEEEEDDDD tears of joy the day my parents actually paid for AOL so I could download AOL 5.0 on the CD-Roms you used to send us in the mail.

I am the BIGGEST AOL fan ever, yet I haven’t used your product for YEARS. Dude, you guys became the big dogs and forgot how to connect with your audience … there’s nothing wrong with that, hey – shit happens, but reconnect!! We want you too!! You were the people that gave us AIM, Slingo, and Poppit! I spent my LIFE in your chat rooms, and I can’t even begin to tell you how many hours it took for me to perfect my profile; AOL is the original social platform.

I’m not entirely sure what they call our generation (the current 20 somethings), but we’re ferociously loyal (particularly the nerdy sect). We can’t be bought, and after seeing the disintegration of the corporate ladder we are clever enough to find our own paths and our own way. That being said, to catch our attention there is one place you can hit … and that is the heart.

It is of my humble opinion that AOL needs to rebrand targeting the nostalgia factor. 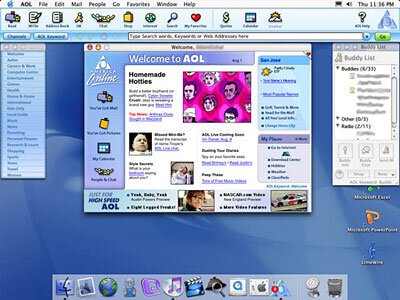 What if you guys had an optional theme to the AOL home page that recreated from top to bottom the old AOL experience. Obviously sending out CD-roms and offering 500 free hours are gone – but you can literally recreate from top to bottom the user experience from having a little chat option to offering games and everything you were known for having back in the day. Keep it really cheeky too, don’t update anything – very literally bring back AOL 5.0.

No need to download – it’s an optional theme, and you can have people create a new screen name (like we used to have back in the day) to capture more active users.

Dude, I would TOTALLY visit a nostalgic AOL and encourage my friends to do the same.

Very matter of fact AOL is irrelevant now, but ADMIT that irrelevance, OWN IT, and say you’re going to bring it back to the good ol’ days and BOOM … here is the optional homepage layout. (Operative word being optional since you also wouldn’t want to alienate your current demographic. This is a value add, not a coup d’état.)

Think about it AOL. Me thinks this could be a good idea.

Oh and here’s my email: jenfriel at talknerdytomelover d c 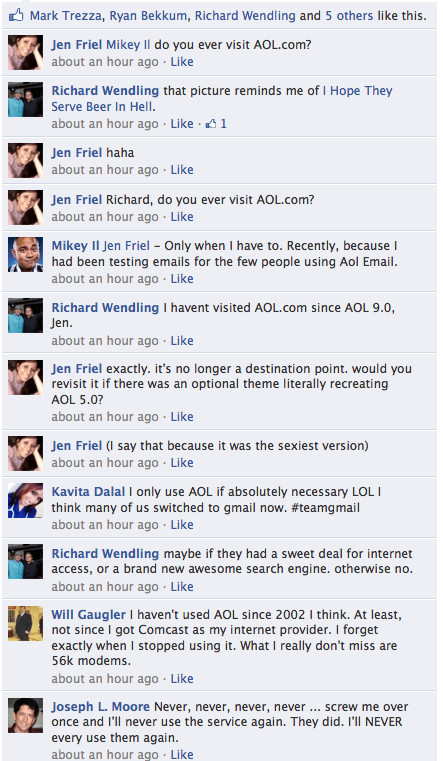 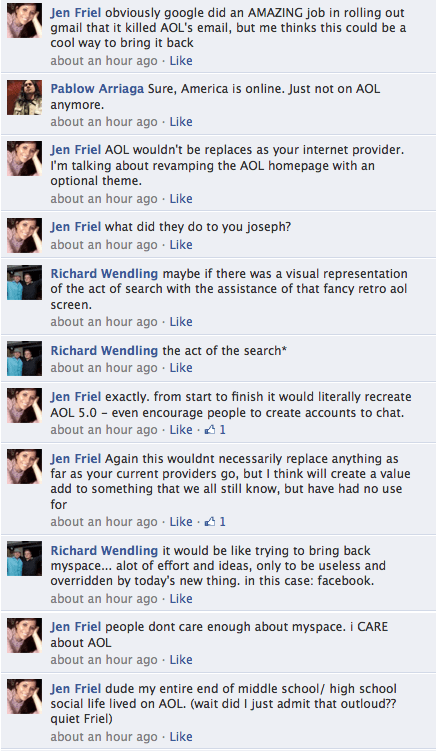 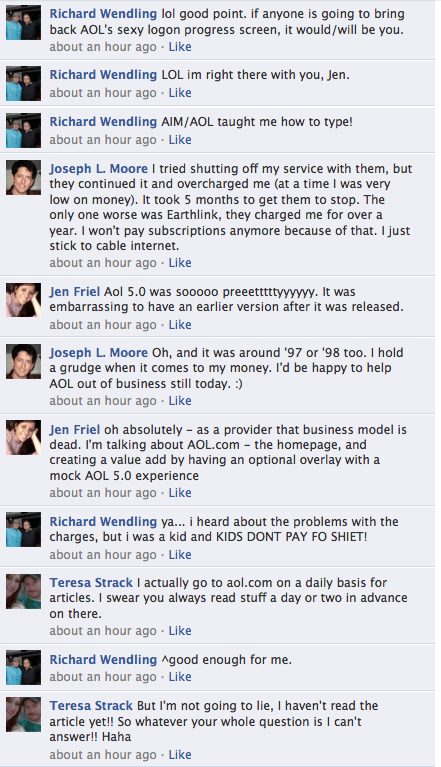 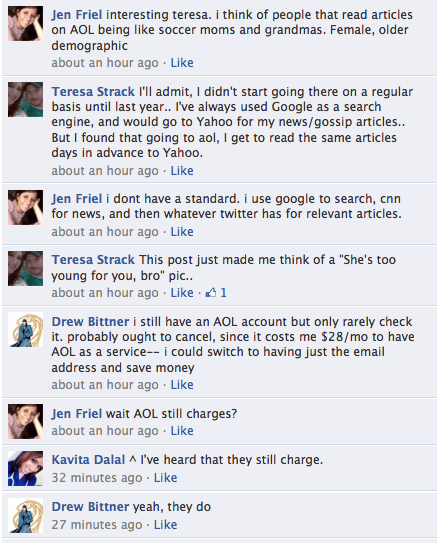 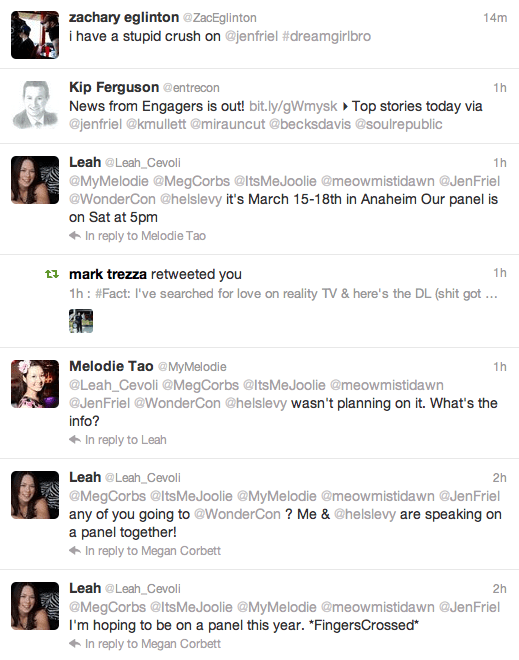 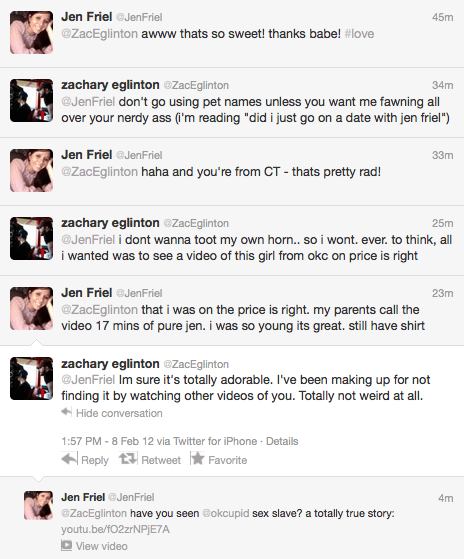 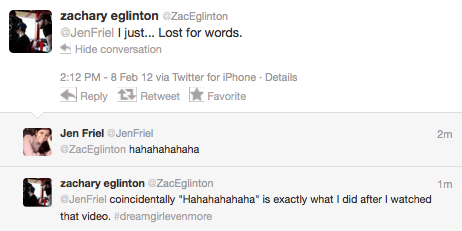 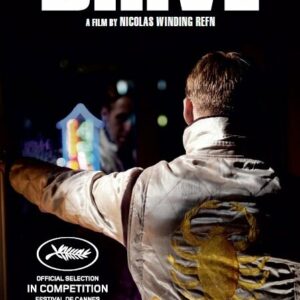 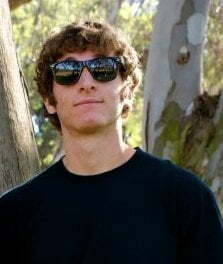