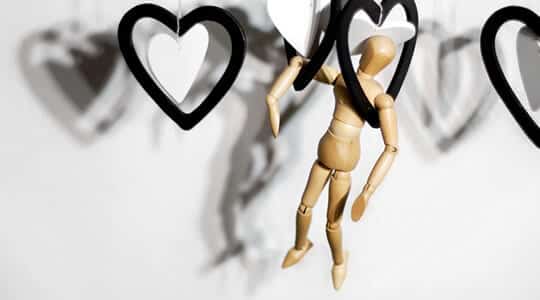 I was chatting with this super cutie patootie pants on OKC last night … and he flat out asked me why I was on OKC. I know … I always hate that … but you’re so cute or you’re so blah blah blah – why do you need to resort to online dating. It’s like are you for REALS? Resort to it!?! I ADDOORREEE online dating!!! For me, it is based on a more logical way to find a partner. Life isn’t a Disney movie – and finding a guy at a bar is just a headache, and phenomenally inefficient. I was born a nerd, I will die a nerd … I am sure when I do meet my future ex husband, the first thing he will see is a screen name and avatar.

Per Spring.org.uk: Somewhere between one-third and three-quarters of single people with internet access have used it to try and meet someone new. But, over the years, we’ve heard conflicting stories about how successful it is.

Believe the internet dating companies and it’s all sweetness and light, with wedding bells ringing in the distance; believe the media scare stories and it’s all lying, cheating, perverted social misfits. The truth is somewhere in between, but where?

1. Internet daters are not losers

Contrary to the stereotype, there’s little evidence that internet dating is the last resort of social misfits or weirdos.

In fact, quite the reverse. Internet daters are more likely to be sociable, have high self-esteem and be low in dating anxiety (Kim et al., 2009; Valkenburg, 2007). These studies found no evidence that people use online dating because they can’t hack it face-to-face. It’s just one more way to meet new people.

People’s motivations to start online dating are many and various, typically involving a triggering event like a break-up, but overall Barraket and Henry-Waring (2008) have found that people’s motivations are less individual and more social. People aren’t using online dating because they are shy but because they have moved to a new city, are working long hours or don’t have time to meet anyone new.

2. Online daters do lie (but only a little)


Although 94% deny their internet dating profiles contain any fibs (Gibbs et al., 2006), psychologists are a suspicious lot. Toma et al. (2008) measured the heights and weights of 80 internet daters, as well as checking their driving licences for their real age.

When this data was compared with their profiles, it showed that nine out of ten had lied on at least one of the attributes measured, but the lies were only small ones. The most frequent offender was weight, with daters either adding or shaving off an average of 5%. Daters were more truthful about their age (1.5% deviation) and height (1.1% deviation). As expected women tended to shave off the pounds, while men gave themselves a boost in height.

These lies make little difference in the real world because the vast majority of fibbing would have been difficult to detect in person. Most people want to meet up eventually so they know big lies are going to be caught.

The saying ‘the camera never lies’ is bunk. Even without Photoshop to iron out the wrinkles, camera angles and lighting can easily change perceived attractiveness.

People instinctively understand this when choosing their profile photo so Toma and Hancock (2010) took photographs of internet daters, then judges compared these to the real profile photos.

Although less physically attractive people were the most likely to choose a self-enhancing photo, overall the differences were tiny. The lab photos were only a little less attractive than those chosen for online dating profiles (about 5% for women and 4% for men). Once again, internet daters weren’t lying much…

Clues to which types of profile photos work come from one online dating site which has analysed 7,000 photographs in its database (oktrends, 2010):

They then looked at which photos were associated with the longest online conversations. These were where it showed the dater:

The photos associated with shorter than average conversations were (in increasing order of conversational deterrent):

(Remember, these are all associations so we can’t be sure about causality.)

Even amongst a diverse population of online daters, people still prefer someone who is similar to themselves.

When Fiore and Donath (2005) examined data from 65,000 online daters, they found that people were choosing based on similarity to themselves.

In this respect online dating is no different from offline dating. On average people are looking for someone about the same as themselves. Indeed there are now many dating sites aimed at narrower demographics such as sports fans, Jewish people or those with particular medical conditions.

To examine internet dating diversity, Dutton et al. (2009) surveyed 2,670 married couples in the UK, Australia and Spain. In this sample internet daters were more likely to have a greater disparity in age and educational background compared with those who had met in more traditional ways.

Although opposites don’t tend to attract, by its nature internet dating does encourage diverse matches. The authors argue that it is changing the face of marriage by bring together types of people who previously never would have met.

Getting a response online can be a hit-and-miss affair. An online dating site has gauged the response rate by analysing more than 500,000 initial contacts sent by their members (oktrends, 2009). Recipients answered only 30% of men’s messages to women and 45% of women’s messages to men. The percentage that lead to conversations is even lower (around 20% and 30% respectively).

The one-third response rate, which is backed up by academic research (Rosen et al., 2008), is partly because many internet dating accounts are dead.

oktrends also found that longer messages only yield a small improvement in response rate for men and nothing for women. So, don’t waste your time writing an essay. Say hi and let them check out your profile.

In a study of online dating, Rosen et al., (2008) found evidence that more intense emotionality, e.g. using words like ‘excited’ and ‘wonderful’, made a better impression on both men and women.

For many, but not all internet daters, the aim is to meet someone new in the flesh. In a survey of 759 internet daters, Rosen et al. (2008) found that 51% of people had made a face-to-face date within one week and one month of receiving replies to their online overtures.

This first meeting is often treated by internet daters as the final part of the screening process (Whitty & Carr, 2006). Is this person really who they say they are? And, if so, is there any chemistry? It’s only after this stage is complete that people can get to know each other.

Despite all the positive things the research has to say about internet dating, there’s no doubt that it can be unsatisfying and aversive. 132 online daters surveyed by Frost et al. (2008) reported that they spent 7 times as long screening other people’s profiles and sending emails than they did interacting face-to-face on real dates.

Part of the problem is that people are encouraged by online dating to think in consumerist terms (Heino et al., 2010). Users are ‘relationshopping’: looking at other people’s features, weighing them up, then choosing potential partners, as though from a catalogue; it’s human relationships reduced to check-boxes.

This is more of a criticism of the technology currently available than it is of the general idea of internet dating. Frost et al. (2008) argue that this will change as online dating services move towards more experiential methods, such as virtual dates (see: why internet dating is aversive).

How well does it work?

There’s only limited data about how well internet dating works and most of this research examined heterosexual daters. Still, Rosen et al. (2008) found that 29% of their sample had found serious relationships through internet dating. Dutton et al. (2009) found that about 6% of married couples had met online in the UK, 5% in Spain and 9% in Australia. Looking at just younger people the percentages were much higher:

If a long-term relationship is what you’re after, we can certainly say that it’s working for some people.

Many are no doubt put off internet dating by the scare stories, especially because these stick in the mind. Some will find the box-ticking, relationshopping aspects off-putting, or get caught out by the tensions between representing their actual and idealised selves online. Still others will find that low levels of response kills their enthusiasm.

The research, however, suggests that most internet daters are relatively honest and, for some at least, it can be successful. 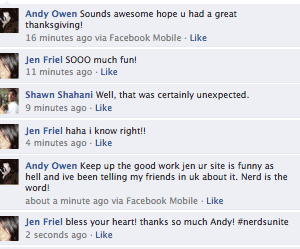 #NSFW: What’s better than texts from last night? Video from this morning! 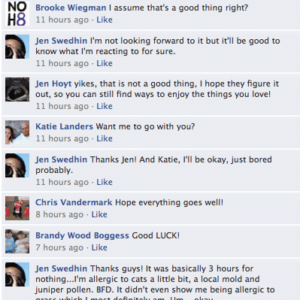 I’m not #allergic to the internet….

I’m not #allergic to the internet….

#NSFW: What’s better than texts from last night? Video from this morning!