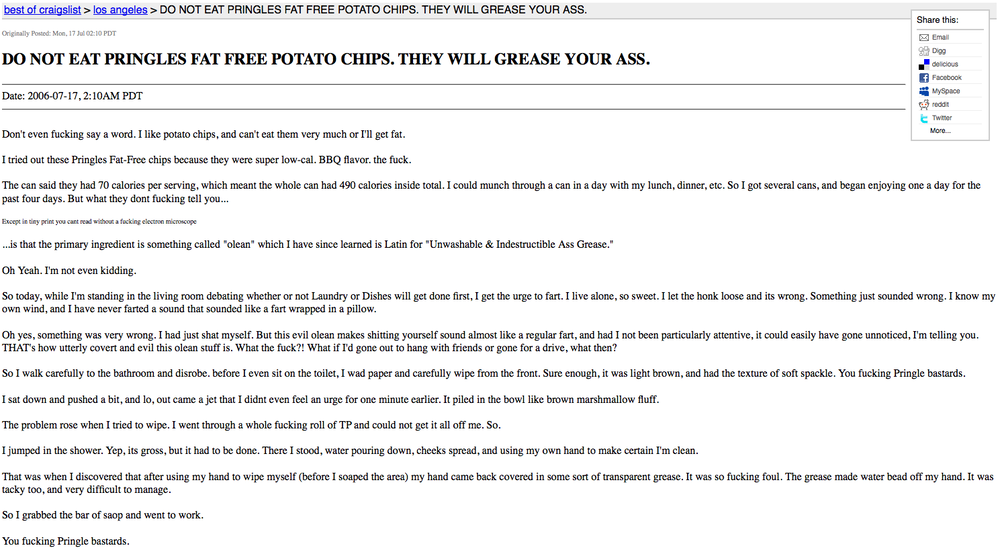 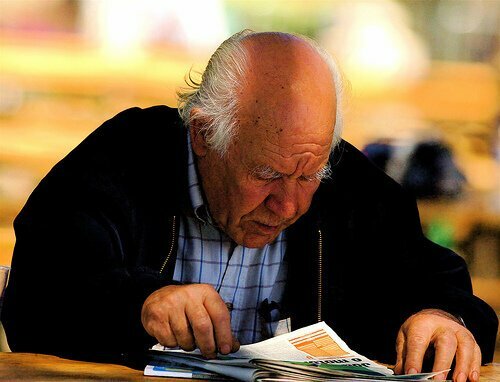 DO NOT EAT PRINGLES FAT FREE POTATO CHIPS. THEY WILL GREASE YOUR ASS.

Don’t even fucking say a word. I like potato chips, and can’t eat them very much or I’ll get fat.

I tried out these Pringles Fat-Free chips because they were super low-cal. BBQ flavor. the fuck.

The can said they had 70 calories per serving, which meant the whole can had 490 calories inside total. I could munch through a can in a day with my lunch, dinner, etc. So I got several cans, and began enjoying one a day for the past four days. But what they dont fucking tell you…

…is that the primary ingredient is something called “olean” which I have since learned is Latin for “Unwashable & Indestructible Ass Grease.”

Oh Yeah. I’m not even kidding.

So today, while I’m standing in the living room debating whether or not Laundry or Dishes will get done first, I get the urge to fart. I live alone, so sweet. I let the honk loose and its wrong. Something just sounded wrong. I know my own wind, and I have never farted a sound that sounded like a fart wrapped in a pillow.

Oh yes, something was very wrong. I had just shat myself. But this evil olean makes shitting yourself sound almost like a regular fart, and had I not been particularly attentive, it could easily have gone unnoticed, I’m telling you. THAT’s how utterly covert and evil this olean stuff is. What the fuck?! What if I’d gone out to hang with friends or gone for a drive, what then?

So I walk carefully to the bathroom and disrobe. before I even sit on the toilet, I wad paper and carefully wipe from the front. Sure enough, it was light brown, and had the texture of soft spackle. You fucking Pringle bastards.

I sat down and pushed a bit, and lo, out came a jet that I didnt even feel an urge for one minute earlier. It piled in the bowl like brown marshmallow fluff.

The problem rose when I tried to wipe. I went through a whole fucking roll of TP and could not get it all off me. So.

I jumped in the shower. Yep, its gross, but it had to be done. There I stood, water pouring down, cheeks spread, and using my own hand to make certain I’m clean.

That was when I discovered that after using my hand to wipe myself (before I soaped the area) my hand came back covered in some sort of transparent grease. It was so fucking foul. The grease made water bead off my hand. It was tacky too, and very difficult to manage.

So I grabbed the bar of saop and went to work.

The bar of soap came away coated in grease as well, and would no longer wash. I had to turn the water to hot and massage the soap for five minutes to get it to the point where I could use it again. It took me an hour to get the fucking grease off my pucker. I shudder to think of what its doing INSIDE ME right now, but I will damned sure never eat that shit again.

HAHAHAHAAHA!! Dudes, you guys gotta read the Best of Craigslist. It FOR REALS makes my life! HAHAHAAHAHAHAHAHAHA 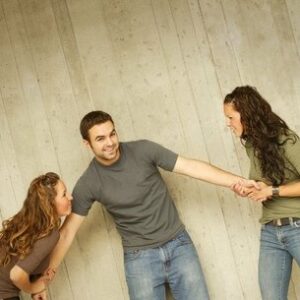 Understanding #Love and Intimacy Leads to A Healthy Relationship

#WTF: Why you trippin’ foo?

#WTF: Why you trippin’ foo?

Understanding #Love and Intimacy Leads to A Healthy Relationship 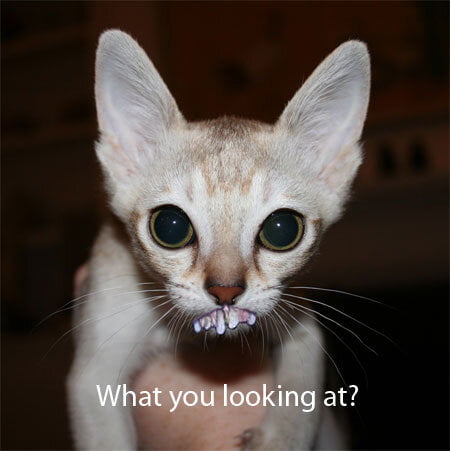 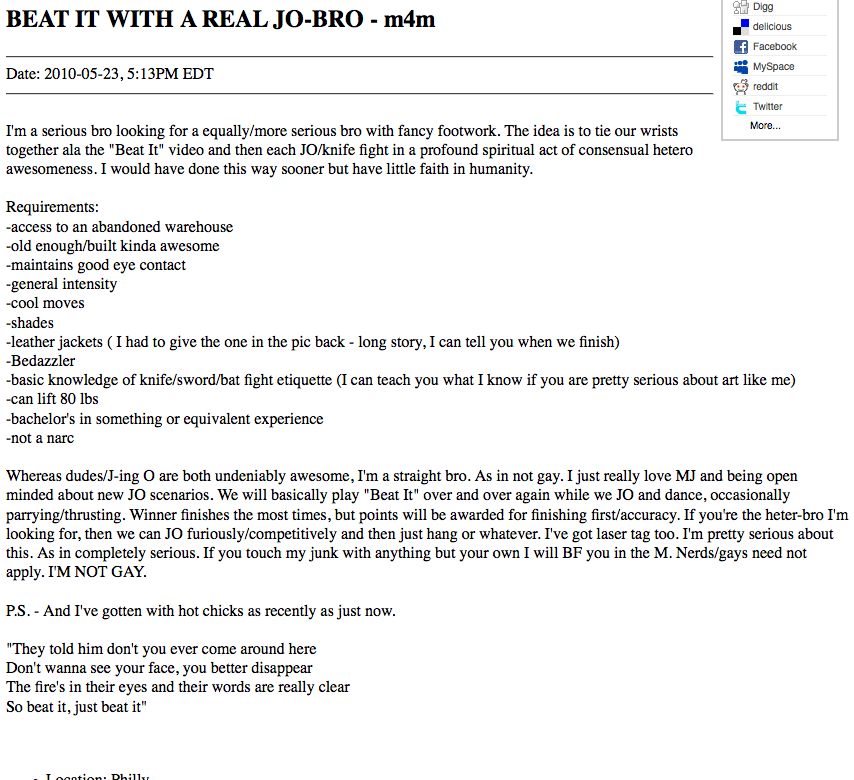