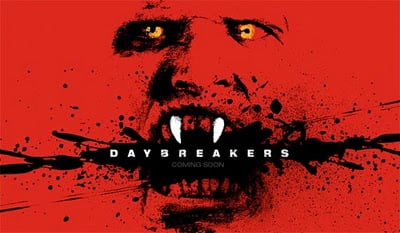 In last the 15 years; we’ve seen leather-clad vampires (“Blade”), Mexican vampires (“From Dusk Til Dawn”), vampire gangs (“30 Days of Night”) and high school teeney-bopper vampires (“Twilight”).  All movies unique in their own way.

With DAYBREAKERS, we get a different spin on the bloodsucker mythos.

At the very beginning of the movie, we see a little vampire girl who has written a letter, then proceeds to go outisde her house. She stands out on the driveway in the early morning darkness, waiting for something on the other side of the hills to come. As the sun slowly peeks over the horizon, the vampire girl makes no attempt to run to the shadows for safety. During this time, the camera switches back and forth between the rising sun and the letter. On the letter, the camera focuses up close on certain words and phrases that tells us that the little girl is planning to commit suicide. As the sunlight hits the little vampire girl, she screams, the ultraviolet rays causes her extreme pain and agony. Her body catches on fire and then collapses in charred bones, ash and embers. That’s one hell of a beginning that catches the audience’s attention.

The movie is set in the near future, the year 2019. It has been 10 years after a plague-like outbreak (not really explained how it started) has changed the world into a population of the undead, knocking the human species all the way to the bottom of the food chain. It’s not much different from when humans ran things. Vampires go to work, talk on cell phones, dress in designer suits, beg on streets, drive cars and live in tailor-made homes. Everything is pretty much the same … except that everybody has pale skin, shimmering yellow eyes, pointed ears, sharp-pointed teeth and no reflection in the mirror.

The vampires even have coffee shops (too bad Starbucks didn’t get “product placement” for this movie, they missed a wonderful opportunity), showing bloodsucking customers using human blood as their cream.

Less than 5% of the planet’s population are still human, the majority of them being kept in a deep coma and being drained of their blood in a high tech “human farming” Fortune 500 corporate building. The rest of the humans are on the run, being hunted down as food by the notorious and much feared “vampire soldiers”. These vampire soldiers cruise around the city (equipped with long-poled neck clamps that emit electrical shocks and tranquilizer dart machine guns) in armored military vehicles, rounding up any stray humans they happen upon. But the humans are fighting back — taking advantage of the daylight and setting up small groups of human resistence to fight the vampires. As bad as the vampires are, they’re nothing compared to the “sub-siders” (vampires that have mutated into hellish humanoid bat-winged creautres after starving from lack of blood and now living in underground tunnels). These sub-siders are so grotesque-looking (a look that seems to be based on the classic 1922 “Nosferotu” film), even the normal vamps consider them as lower lifeforms (even below humans) that they order a wide-spread eradication of them.

Charles Bromley (played by actor, Sam Neill), is the evil tyrant of the world’s leading blood supply corporation. Bromley has to deal with the global crisis of the dwindling blood supply (only having enough to last another month due to the almost-extinction of the human race) and must find a synthetic blood replacement for the vampire society before they starve to death and mutate into the sub-siders. Edward Dalton (played by actor, Ethan Hawke), is the corporation’s lead hematologist who secretly resents being a vampire. He sympathizes with the human suffering he sees and has vowed never to drink a drop of human blood. Dalton is given the task of trying to manufacture the miracle elixir that will keep his fellow vampires thriving long after the human blood supply runs out. But Dalton has other plans in mind … he wants to find a “cure” for his disease.

When his car almost collides with a car full of human survivors, Dalton decides to hide them from the pursuing vampire military who are just a couple of minutes away. Audrey (played by actress, Claudia Karvan), one of the humans Dalton helped hide, pays him a visit at his very home the next night and tells him that the human resistence needs his help.. They arrange a meeting. Dalton makes a trip to the countryside during daylight hours (protected from the sunlight with the assistance of special car modifications — front & back cameras that feed live images to vehicle monitors and pitch-black windows that keeps ultraviolet rays out). Protected from the sunlight under a giant gnawl-branched tree, Dalton meets Elvis (played by actor, Willem Dafoe), a former vampire who was accidently cured of his affliction and now leads the human resistance. Their meeting is soon interrupted by Dalton’s younger brother, Frankie (played by actor, Michael Dorman), a vampire soldier, who has Audrey at gunpoint. Soon, Frankie’s fellow vampires race down the snaking dirt road in an armored truck, firing a barrage of tranquilizer darts. Dalton, Audrey and Elvis jump into Dalton’s car and speed off. The vampires are in hot pursuit, resulting in a breathtaking car chase that is one of the highlights of the movie.

Escaping the vampire military, Dalton is now also on the run from the vampire soldiers as a traitor to their species. Dalton now has no choice but to stay with the humans at their secret compound (an old winery belonging to to Audrey’s family) and help them find a cure, but his being a vampire makes the majority of the humans not trust him.

I don’t want to give the ending away because there’s some twists and turns that will definitely surprise you.

Daybreakers is more Science Fiction than Horror, but there are some gory scenes (limbs being torn apart from humans in vampire-blood-frenzies) near the end that will keep the Horror enthusiasts very happy. I hadn’t seen a scene that crazy since the vampire movie, From Dusk Til Dawn. When the vampires smell the sweet aroma of blood, you know that their “blood thirst” is gonna kick into overdrive and all hell is gonna break loose.

The script is mediocre, the dialogue having a B-movie quality to it. The sub-sider creature design with its full-body prosthetics is completely awesome, making it look all too realistic.

As the movie’s hero, Ethan Hawke surprisingly doesn’t do any action-type stunts, but his performance is good enough to have you cheering for him. Willem Dafoe’s performance is down right excellent as the wild-eyed rebel, the screen coming to life whenever he speaks (especially his one-liners that make the audience chuckle). Dafoe will have you grinning from ear-to-ear (trust me on that). The rest of the cast seem to be stale in their performances and seems to be around just to deliver their dialogue and kill time until we get to see Hawke and Dafoe perform on screen (the film really belongs to these two actors).

While not as romantic as “Twilight” …. and not as savage as “30 Days Of Night” …. DAYBREAKERS gives plenty of suspense and action to keep the viewers well-entertained and jumping from shock moments throughout the entire movie! From vamps exploding into blood and embers when stabbed with wooden stakes …. to the insane vampire gang blood splatter-fest on some unlucky humans, DAYBREAKERS won’t disappoint! This is a “What if” scenario that everybody will love!

I give Daybreakers a 9 out of 10 rating! 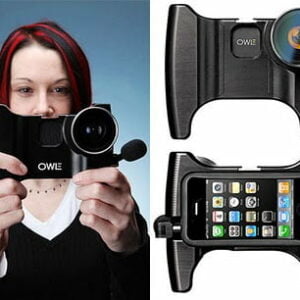 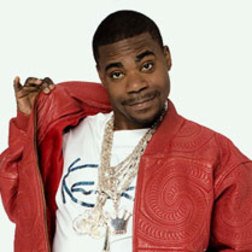